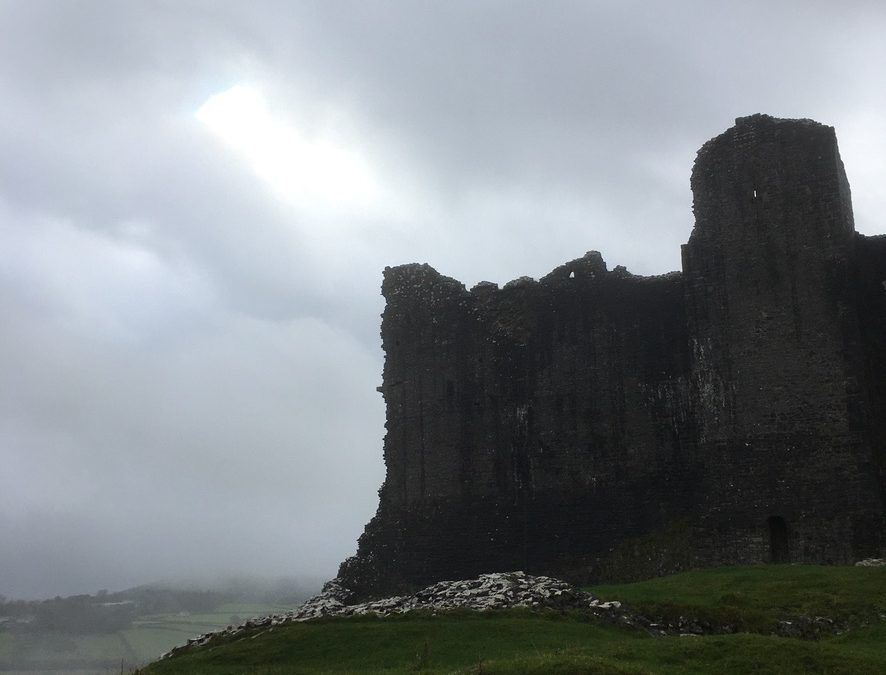 The Queen and the Dragon’s breath

Once upon a time there was a Queen who lived in a beautiful castle high on a hill with commanding views of the fertile valley below where cattle grazed peacefully. Along the valley floor, the winding river gleamed with sea trout making their journey upstream to spawn.

This castle was furnished with the finest tapestries and beautiful oak tables and chairs. Silver candlesticks gleamed reflecting the glow of roaring log fires burning in huge stone fireplaces. The vast larders were full of the finest food and the soil of the castle farms was laden with crops tender and bountiful.

In the castle yards young girls practised archery and chased the boys through the market stalls. There was laughter and the sun shone.

The newly crowned Queen was melancholy. She sat in her opulent bedroom, before a small window and looked to the bleak wastelands of the north. The mountains in the far distance were dark and forbidding and her mind wandered to that cold and terrible day when her mother had set out to find the dragon of the Black Mountains.

Tales of the dragon and his terrible wrath began to fill her dreams. His fiery breath burnt through the chambers of her mind and left her with an endless chill in her heart as she mourned her warrior mother.

Her mother had never returned so she was declared Queen of this prosperous kingdom. But day after day the new Queen would sit in her bedchamber and sorrow filled her chilly heart. She grew pale and thin.

As the seasons turned, the sun sank lower and the laughter died away. Winter came and an icy wind blew in snow storms night after night. The chill in the Queen’s heart began to seep into the castle walls. The fires burnt night and day yet still the cold grew. The castle walls began to decay and a deep despair settled on the kingdom.

The ground was frozen hard and the winter crops remained stuck fast. The cattle grew thin as the hay ran out. Labourers drifted away, hearing things were better in the neighbouring kingdom.

The once overflowing pantries grew sparse and the children disappeared, fallen ill or gone away. All except one. Ana.

Ana was a distant cousin of the Queen. When she was born, she had about her head a halo of soft gold. As she grew, the halo shone brighter. When the kingdom prospered it did not show so much, as all the land and people in it were bathed in sunshine. Now in this dark winter, Ana’s halo shone like a golden fire around her head.

One day the Queen, walking listlessly to her throne in the great hall saw this golden light illuminate the dark walls of the narrow corridor.

‘“Who’s there?” she called in slight alarm.

“It’s me, Ana, your cousin, ma’am” the Queen was curious.

Ana came and went into the great hall with the Queen. She talked and the Queen listened for three days and three nights.

On the third night, the Queen had a dream. She saw her mother’s warm and smiling face as she reached out to embrace her. Her mother beckoned and pointed to the small window.

The Queen looked and saw for the first time the glorious snow capped peaks, iridescent in the moonlight. As she gazed in wonder at the beauty, she saw in the outline of those craggy mountains, the shape of a dragon in mid roar.

At the foothills, the mist of the dragon’s breath wrapped tenderly round the small settlements shielding them from the icy cold of the clear skies above.

She felt her mother’s brave and generous heart and a peace descended on her such as she had never known. She fell into a deep and restful slumber.

The next morning, the sun rose higher and higher and the terrible frost began to thaw. The soil cracked open and new shoots appeared. The dogs shook themselves, the cattle lifted their heads and children appeared once again in the courtyard. Laughter rang out.

You may wonder what young Ana said to the Queen through those three days and nights. What great secret did she share?

She simply talked of her life in the castle: her love of running through the woods and climbing trees, of chasing the boys round the market stalls, of the smell of her father’s cooking and her joy at riding on horseback with her mother. She talked of finding a swallow’s nest under the eaves of the hay barn and watching every day. The thrill of seeing three pairs of eyes appear when the eggs hatched and waiting breathlessly until the day they fledged.

As she talked of the wonder and beauty of Life, Ana’s halo grew brighter and brighter. And the Queen saw all she was missing, in her beautiful vibrant kingdom.

The kingdom prospered. Ana and the Queen spent many hours laughing together in the woods, walking by the river and telling stories by the roaring fire with full bellies and happy hearts. Their halos shone brightly as did the halos of all the beings in the kingdom.

What you appreciate, appreciates. And so it seems …. deeper and deeper …. wider and wider …. for me, for you, for everyone. It is one of those sayings we hear and we nod sagely. “Ah yes”, we think, that’s true, then return to our habitual worrying and fretting about things done and not done, said and not said. This modern fable is for all of us, to help us remember.

Juliet Fay is a poet & Three Principles Facilitator living on an estuary in West Wales, UK. She is dedicated to exploring and appreciating the wonder and power of the human spirit. Going deeper, beyond what we know. To do that she engages in heartfelt conversations pointing back home; mentors pioneers, creatives, community leaders, helpers and healers; hosts regular gatherings around books or topics close to her heart (by invitation only) and creates soulful poetry, podcasts, illustration, artwork & prose to awaken the heart. She welcomes curious new subscribers to her email list ~ subscribe.